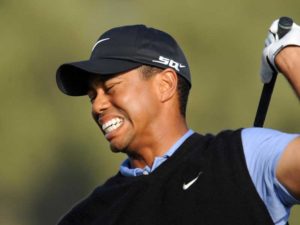 Athletes assume various risks to compete and achieve success in sports. Many of this risks could compromise their short-term and/or long-term health and could possibly threaten their future careers in elite sports. Society has a conflicted and hypocritical relationship with these risks.

If the risks involve any sort of performance-enhancing drugs like steroids or growth hormone, then the athletes are condemned by society. It doesn’t really matter how serious, exaggerated or overstated the risks from PEDs.

But if the risks involve playing through a relatively serious injury regardless of the long-term damage and health implications, then the athletes are idolized and celebrated for their bravery and gutsiness and heroism.

A case in point is Tiger Woods’ recent revelation that he ignored his doctor’s advise and played with a torn anterior cruciate ligament in his left knee and a double stress fracture in his left tibia.

Woods revealed Wednesday that he has been playing for at least 10 months with a torn ligament in his left knee, and that he suffered a double stress fracture in his left leg two weeks before the U.S. Open.

Michael Yessis, PhD explains the stupidity of playing with such an injury.

The fact that Tiger knew about the torn ACL (anterior cruciate ligament) but still decided to play was, in my estimation, not very smart. Even worse was that when the stress fractures which occurred during his rehabilitation were discovered two weeks before the U.S. Open, he still decided to play. In essence, the reports state that when Tiger was given the bad news he looked the doctor in the eye and said, “I’m playing in the U.S. Open and I’m going to win.” He then put on his shoes and went to practice.

This rings of the mentality commonly seen in many sports. The athlete must be brave and “suck it up” and continue playing regardless of the pain. This is considered being a “man”, real macho. I say it is one of the most stupid practices ever perpetuated on the athletic community.

Is it really worth putting your career on the line for the sake of winning one game or tournament? Coaches, fans and players will not remember the player who did this a year or two after he is out of commission. Getting accolades in the press will not give the athlete back his ability to play and to play well.

Tiger is receiving rave reviews on how brave and tough he was to play the Open with a torn ACL and a double stress fracture. I’ve yet to see anyone ask how much greater is his injury now in comparison to before playing (and practicing) in the tournament?

Golf legend Jack Nicklaus (and many others in the press, the sport and general public) praise(s) such stupidity.

“In light of this week’s revelation about Tiger’s health, it makes his performance in the U.S. Open that much more phenomenal,” Nicklaus said. “I have always said that the U.S. Open is the most difficult and complete examination of a golfer, and for him to persevere with a damaged knee and stress fracture is a testament not only to his ability, but his tremendously high level of competitiveness.”

Eugene Robinson of the Washington Post can’t praise Tiger enough for “one of the most amazing, most thrilling athletic performances in memory.” He compliments Tiger Woods by his willingness to do whatever it takes to win.

It makes you wonder if there’s anything Woods wouldn’t do to win a golf tournament.

Society’s hypocrisy tells us that some risks to health are to be celebrated and others are to be condemned.

Can you imagine Barry Bonds being idolized and celebrated as “brave” and “gutsy” and “phenomenal” and “determined” and “focused” and “willing to do anything to win” by using anabolic steroids and accepting the (minimal) health risks associated with the drugs?