And we take a return to this series, in which I show you the pros (and cons) of different steaks. If you haven’t read the last article I’m talking about the different cuts, and why (and when) you should eat each one.

So, with no further ado, here’s the final part.

Undeniably tasty, sirloin is an all-rounder cut, good in nearly every aspect.

With an average fat content of 4.5%, sirloin is a great balance of flavour and texture in between rump and fillet steak. If you’re training hard enough to burn the extra calories, this is a great choice of seak.

It needs to be cooked slowly and for longer than that fillet or rump steak, so that the fat can melt into the meat and unlock the most flavour. Which, of course, is one of the reasons for eating the steak in the first place.

With a fattier cut, it’s also better to go for a grass-fed beef instead of a grain-fed because it contains healthier fats. A study at the University of Bristol has found more omega-3 fatty acids in cows that graze, meaning a healthier heart and brain for you, just not for the cow (unfortuneately).

The same study found that that grass-fed cows also have more vitamin E, which increases the speed at which your muscles repair themselves – so stock up if your trying to get bigger.

Rib Eye is the most flavorsome steak…but save it for special occasions, or periods of really hard training. 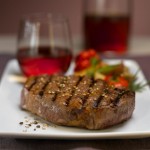 Rib eye steak is sometimes called the steak lover’s steak. But at 12-14% fat, you need to be prepared to do some serious calorie burning afterwards.

Rib eye is made up of two types of meat the sirloin and skity muscle from below the cow’s shoulder. It’s iron helps regulate your metabolism to give you energy all day. As there is a lot of fat, flash-frying it and eating it rare won’t give you the best flavour. Buy small, but thick steaks and cook them for longer without turning them into charred bricks. You’ll get more flavour as the fat within the meat effectively gets the steak to self baste.

1. Place your steak – it should be a few inches thick 0n to a flat surface, with the ‘grain’ horizontal.

2. With a sharp knife, cut down, accross the grain to half the width of the steak.

3. Fold the meat out from the cut so it sits on a new end, with the ‘grain’ vertical.

4. Brush the steak lightly with seasoned oil before you grill.

And so, that concludes the series, with details on all the most popular steaks. Now, get cooking!

Cialis And Bodybuilding
Clean Vs. Natural – Making Sense of It All
Nutrition Tips For The Bodybuilding Beginner
Work with Your Body Type: Apple Shape