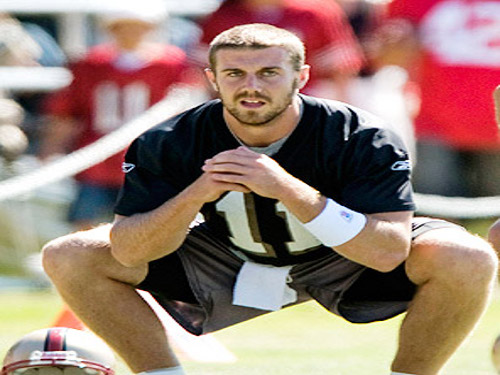 You were a very good quarterback in college. Taking Utah, with Urban Meyer as your head coach, in that gimmicky offense to a BCS game was impressive.

You used a once-proud franchise like the 49ers to get rich quick with your smoke and mirrors.  You knew that you didn’t have the intestinal fortitude to run a pro offense.  You knew that you couldn’t scramble around in the NFL like you did in college.

Yet, somehow, you suckered the Yorkes into drafting you too high and spending far too much money on you.  Now, every young 49er fan has no idea what it’s like to have potential on their side.

They think you might be Joe Montana incarnate.  What a load of crap that is!

Every time you seemingly “improve,” the entire Bay Area is twisted into knots wondering if this is the moment you’re going to get it.  Every year they’ve wondered, “Is it time?”

You see, it’s not just that you suck — although you suck mightily — it’s that you continually tease us with “improvement” that isn’t happening.

You probably don’t even understand the shoes you’re walking in as the quarterback of the proudest franchise in pro sports.

I Think I Speak for Everyone…

…when I say that I hate you.  I hate the fact that you’ve hamstrung our payroll.  I say “our” because I was here before you and I’ll be here after you.  You’re a fly on the windshield of the San Francisco 49ers and their fans.

I hate that you’ve wasted far too much of Mike Singletary’s energy trying to get you up to his level.  The man is clearly a brilliant coach and his time could be better spent with real football players.  You’re just a poser.

I hate that I think we might be able to get back to where we were when Steve Young retired.  I hate thinking you might be a sleeper and then you lose to the Seahawks 31-6.  THE SEAHAWKS!!

Their QB is 1000 years older than you.  His arms and legs are about to fall off at any moment.  They have almost no weapons on offense.  They let go of their best receiver.  They were downtrodden and their defense was afraid to sit on the field with you.

What did you do? You allowed them to trample you, punish you, and humiliate an entire fan base.  Yes, we’re pissed and we’re humiliated.

We’re tired of you.  We tired of you collecting paycheck after paycheck when all of us working stiffs are busting our asses at work and you’re “improving” in reverse.  If I did my job like you do yours I’d have been fired years ago.

Frankly, anybody who’s reading this is a better quarterback than you.  I know that’s a tall statement and you can be insulted if you want, but you know it’s true.

If I had to take a hit in the pocket while throwing for a first down I’d take it.  For the money you’re getting you can take it too.  Stop trying to be something you’re not.  Stop trying to be “Tim Tebow, Sr.”  You couldn’t find Tim Tebow’s jock if we put you in dryer with it.

Yes, I hate you.  I freaking hate you, and I hate that you’re aiding the continued destruction of what once was the best franchise in ALL of pro sports.

Hey, anybody got Mike Singletary’s e-mail?  I’ve got an idea for him…