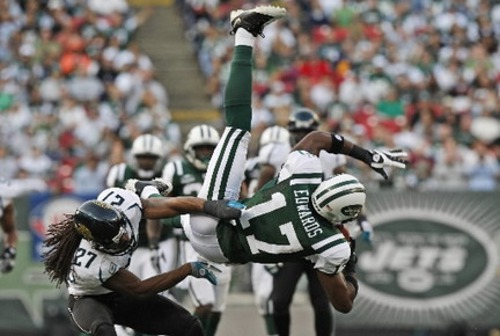 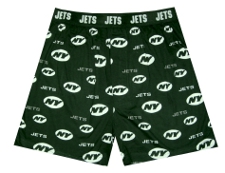 In 2003, the most celebrated player in Jets history, Joe Namath, had one of his worst moments in front of millions of people at a Jets game. Namath and some of his former teammates were being honored at half-time.

ESPN sideline reporter, Suzy Kolber, tried to conduct an interview with an obviously drunk Namath. Several times throughout the interview he told Kolber, “I want to kiss you.”

As embarrassed as she was, Kolber maintained her professionalism. Namath on the other hand, looked like a creep and later became a YouTube sensation.

Last season, after the Jets were eliminated from the playoffs, head coach Rex Ryan went down to Miami to enjoy some of the festivities.  He was caught on camera giving some of the Dolphins fans the middle finger.

The Jets have received much criticism for signing several players this past year with checkered pasts, starting with signing Edwards last season before the trade deadline. Then they signed Santonio Holmes, who is still suspended for violating the league’s substance abuse policy. Finally, they signed Antonio Cromartie, a player with paternity issues in a several states.

The Jets were featured on the HBO hit show Hard Knocks this past summer bringing even more attention to a team filled with loud mouths.  Ryan again stirred up some controversy when former Indianapolis Colts head coach Tony Dungy criticized his use of excessive profanity.

Recently, team owner Woody Johnson was so embarrassed by the lack of respect his team showed Azteca reporter Ines Sainz, he issued a personal apology. This particular incident is still under investigation by the NFL.  The team reportedly catcalled her while she was waiting to interview Mark Sanchez and made other inappropriate gestures.

There is a Player Protect program that provides a 24-hour driving service for professional athletes to avoid these situations.  It wasn’t even like they had to ride in some stinky cab five people deep.  They could have rolled home safely in style.

The car was filled with three first round draft picks and my understanding of the rookie wage scale tells me that all of these men should have plenty of cabbage to pay for a ride home.

The worst case scenario is that Edwards would have to park his car somewhere it could be towed and possibly impounded.  Once again I go back to the money situation, I’m sure Edwards has enough money to get his Range Rover out of impound.

It’s not like any of these men are the average guy who just spent $100 at the bar and were stressing about a $50 dollar cab ride home – not that they are excused from driving drunk because they can’t afford it.

A One Game Suspension Is Necessary

You can’t let a player pay his dues with the legal system, do some community service, and continue on like nothing happened.

Edwards is the same guy who was partying with Donte Stallworth the night he drove drunk and killed a man.  Obviously, if that wasn’t enough to teach him that driving drunk was a bad idea maybe watching the game he loves from the sidelines will be.

I personally would sit him out for two games, but I don’t think the team will go that far.  The point is that players need to understand that there are consequences for doing irresponsible things and it starts with taking away the things they love the most — money and the game.