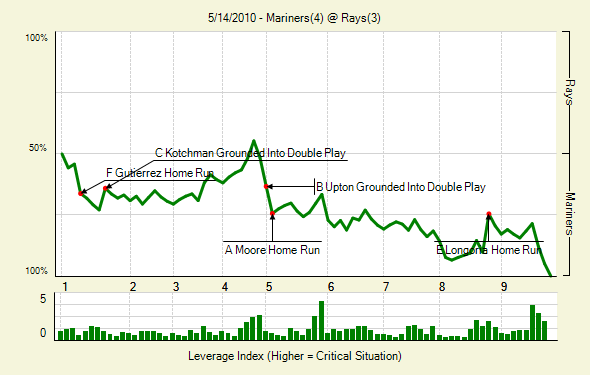 The Houston Rockets fell to 0-5 with a loss to the Spurs last night and all I could think was, “I hate stats.”  Their pretty-boy GM, Daryl Morey, runs the team based on stats and the like. It isn’t working.

I think the team was just fine when Hakeem Olajuwon was working the post.  Don’t you?  Instead, everybody on the planet got obsessed with stats.  Fantasy sports and anything math-related has made sports, at times, unbearable to watch.

Just look at all the “stat stars” we have in sports.  Aaron Rodgers and Matt Schaub are supposed to be “superstar” quarterbacks in the NFL.  Have they won anything lately?  Nope. Hell, Schaub’s Texans can’t even make the playoffs, and Rodgers’ Packers can’t win a playoff game.

Doesn’t it strike you as odd that teams can be statistically number one or two in defense and have a 4-12 record?  Doesn’t it seem a little “funny” that a team in college football can lead the nation in total offense and not be anywhere near the top 25? That’s because stats are stupid.

Baseball is the only sport where stats matter.  If a guy has a .400 batting average with runners in scoring position you probably shouldn’t pitch to him when the bases are loaded. When a pitcher averages nine strikeouts for every walk he issues a batter can’t just look at pitches.  He’ll get struck out.

A pitcher with a 1.07 ERA is a bad ass.  Period.  You can try to hit him but it probably won’t work.  Cincinnati’s Aroldis Chapman can throw fastballs over 100 mph consistently.  That number alone makes batters swing early and miss.

Chapman’s slider can reach into the high 80s.  That’s about 10 mph faster than your average slider.  Again, that number makes batters swing early and miss. Numbers matter in baseball.

I’ll Make a Couple Other Exceptions

When a football coach gets caught in a tackle and breaks his leg and then his team goes on a winning streak, he’s probably lost the team.  I mean, what kind of jackass has to be so cruel to his team that they start winning after he stops coaching regularly?

When a runner is on first base and he knows the opposing catcher throws out 85% of base stealers, he probably shouldn’t run.  When a baseball/basketball team is down 0-3 or 1-3 in a series they’re probably done.  You can count on it. Outside of these few things, the stats in sports just put a deceiving spin on the games.

Welcome to the Land of the Ridiculous

You can listen to them all day long, but they rarely line up with what the game is telling you.

I like to go with what’s obvious.  When the Falcons didn’t have back-to-back winning seasons they were obviously a poorly run franchise.  Mike Smith comes in, they draft Matt Ryan, and suddenly they have consecutive winning seasons.  I think they figured it out.

When Texas has a “top 5″ recruiting class every year they forget to mention that those recruits are 18-year old kids.  Most of them aren’t very smart.  They’re kids so they make bad decisions, and they aren’t getting paid.  Last I checked, Texas disappoints more than it fulfills.

When Kentucky has five gazillion McDonald’s All-Americans on the team they forget to mention those kids are also 18, not very bright, and prone to bad decision-making.  Did Kentucky win the national title last year?  Nope.

Stats hate most of us.  They point us in the wrong direction all too often.  While we’re waiting for something “statistical” to happen, something obvious happens instead.

You know what I do when stats hate me?  I do what Martin Riggs did in Lethal Weapon. I hate them back.