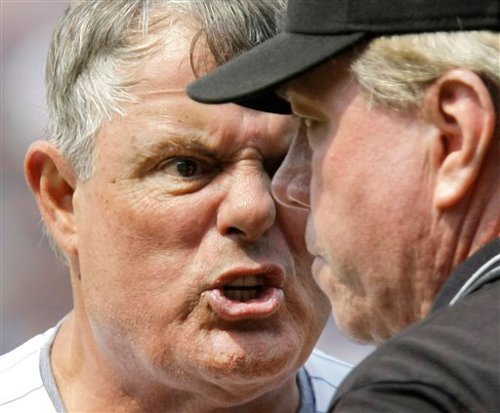 Sports is a world of cut and dry, black and white, right and wrong.  Unless you’re an official, then you’re just wrong, but I digress.

Sometimes there are things you never hear.  People rarely question Brett Favre’s ability.  No one ever questions LeBron’s talent.  No one ever doubts a move the Yankees make.  No one ever picks the Bills to accomplish anything.  You get the picture.

I’m going to step outside the box and say some things no one has ever said.  Ever.  These words might have been used before, but not in this order.  We’ve heard Lou yell “F*************** yoooooouuuu!” at an umpire, but these are brand new thoughts for the casual sports fan.

You can call me crazy, but I firmly believe in what I’m going to say about Kobe, LeBron, women’s basketball, Brett Favre, and Tony LaRussa.  I know, I picked the highest of profiles, but these folks deserve to have these ideas brought to bear.

No more hiding ladies and gentlemen!

Let’s Just Get Women’s Basketball Out Of The Way 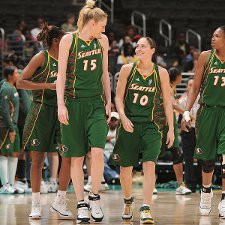 The Seattle Storm just finished off a sweep of the WNBA finals last week.  It only took them three games to dismantle their opponents and waltz off with the title.

Their opponent?  The Atlanta Dream.  Yep, I’m in Atlanta and that’s the hometown team.  Granted, I don’t particularly care about the WNBA, but I had no idea the Dream were in the finals until I saw it online during halftime of game three when they were losing.

Women’s basketball is so irrelevant and so poorly marketed that the team that exists in my hometown — a team that shares Philips Arena with the Hawks and Thrashers — was in the WNBA finals and I had no idea.

I don’t think anyone who listens to sports radio has ever had a pro sports team in their city reach the championship round unnoticed.

Not only do I imagine I wasn’t the only person in Atlanta who didn’t know, but it didn’t stir me at all.  I’m not a Hawks fan, but I’d be intrigued if they made a run to the NBA finals.  This team…not so much.

The NBA needs to stop underwriting the WNBA and start marketing it better, start making the ladies throw down dunks, and stop trying to tell us is “correct basketball”.  It isn’t.

Jordan’s six titles, Kobe’s five, Russell’s eleven, and the Spur’s dynasty are “correct basketball”.  To try to sell us anything else is a sham at best.  Stop insulting our intelligence and do it better or just stop the charade altogether.

Brett Favre Can’t Do It Anymore 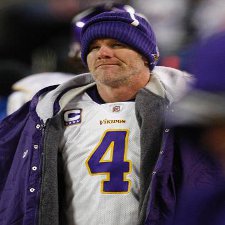 Time has crept up on Brett Favre.  He was sitting in Mississippi when the Vikings sent an entourage to bring him back and he thought, “Aw shucks, this’ll be fun guys!”  Only, it isn’t fun.  It sucks, Brett’s old, and he knows it.

The Vikings have started 0-2.  They’ve shot themselves in the foot by dragging Brett out of retirement when he really wanted to stay at home.  Now they have a guy who’s over it, no backup plan, and dwindling team morale.

Ever work for someone who’s about to retire?  They just kind of don’t care anymore.  They let things slide and they let you know their time is almost up.

This is what Brett is telling us.  He’s over it, and he looks the part.  I’m not sure that anyone else could be more disinterested in the NFL, and that includes Ricky Williams and the chronic.

You know who I blame now?  The teams.

Brett was ready to be done and the Packers saw it.  They moved on with Aaron Rodgers and did Brett a favor.  Then the Jets and Vikings moved in for the kill and got something out of Favre when he was really ready to be done.

Imagine if those interceptions are being thrown because he’s just not that into it anymore.  He like Ricky Bobby’s daddy in Talladega Nights. He can’t let a good thing come up, at this age, without screwing it up.

The teams did this to him.  They are playing his emotions and getting burned.  He doesn’t want to be there and they should have known that.  Maybe the interceptions are his subconcious payback.

I’m done booing Brett.  I blame the Jets and the Vikings.  Brett was an innocent bystander in all this. 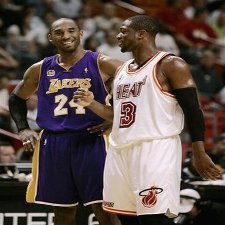 The NBA is doing quite well considering we’ve had two Celtics/Lakers finals in the last three years.  It doesn’t really need any help, but LeBron is intent on helping.

He wants to Heat to be one big toga party that wins 75 games and wins titles, but it won’t happen.  LeBron thinks he’s bigger than the NBA, but he isn’t even the best player on his own team.

Just think of who’s won titles since 1980:  Magic, Larry, Michael, Duncan, Kobe, Shaq, Wade, Hakeem.  Those are winners that already moved the meter.  If LeBron wins a title he won’t be “the man” and won’t really belong on this list.

I can hear some of you saying, “What about the Olympics?”  Ok, the Olympics.  In 2008 Kobe won the gold medal game in the second half by himself.

In 2012 Kobe will probably play the greatest “garbage minutes” in the history of basketball and save the butts of everyone on the American team — again!  He’s still the best and we all know it.

Kevin Durant could add his name to our list of title winners and we’d gladly welcome him.  LeBron could try to add his name to the list and we’d all say, “That was D-Wade’s team”.  LeBron doesn’t move the meter like he used to.

The Cardinals Got Lost 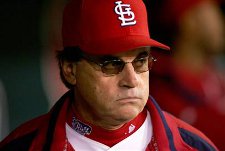 Tony LaRussa has done some incredible managing in St. Louis.  He’s won a World Series in both the AL and the NL.  He’s a great baseball mind.  He’s going to the Hall of Fame when he retires.

Those are all givens.

The Cardinals making the playoffs this year is not a given.  In fact, they’re not going.  The Reds have successfully stayed on top of the NL Central because the Cards can’t beat bad teams.

That’s right.  He lost the clubhouse.  They don’t buy it anymore.  His smug attitude.  The glasses.  His holier-than-thou demeanor.  They’re done.

You can say next year is a new year, but this team is done with it.  Tony needs to step aside.  They’d never fire him — and they shouldn’t — but he should be smart enough to step aside and let someone else try.

The Reds didn’t come out of nowhere and they haven’t been perfect.  It’s not like the Cards just got sideswiped by a “team of destiny”.  They just flat don’t care anymore.

Secretly, I bet some of the guys hoped Dusty Baker would’ve stabbed Tony with his toothpick during their famous brawl during the summer.  You can see how much the guys on the Cards don’t care.

They want a new voice and they want it now.  You can deny it.  They can deny it, but it’s true.  You know what “lost team” looks like, and these Cardinals are lost.