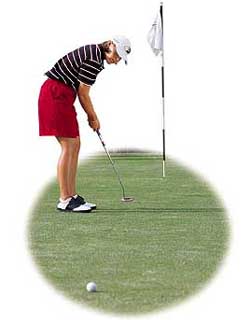 Spend less time reading the break and more time focusing on speed. On long putts, the surest way to get the ball close is to judge the distance correctly. Stand to the side of the ball and rehearse the stroke, getting a feel for the effort required. It also helps to divide the putt into segments: Walk halfway to the hole, look at the ball, look at the hole, and then make some practice strokes. Dividing the putt in half will make it easier to judge the entire distance. 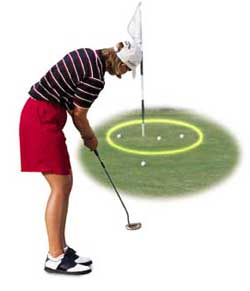 With any long putt, the goal shouldn¹t be to sink it, but to leave yourself an easy second putt. It¹s similar to laying up on a par five: You want to leave yourself the perfect distance for the next shot, which, in this instance, is three feet or less and preferably uphill (anything longer than three feet and the pressure builds, while putting uphill lets you be more aggressive). I picture a circle six feet in diameter around the hole. If I can get my first putt within that circle, I¹ll almost always make the second.

3. USE AN INTERMEDIATE TARGET 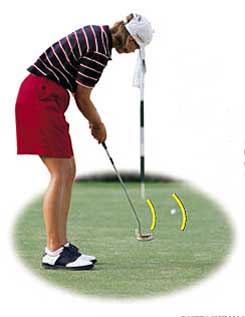 When you read the putt, be sure to focus on the entire line, not just the starting point. Pick an intermediate target about halfway to the hole and use that as your intended line. Then visualize the putt rolling over that spot. Think of the whole putt as you would a ski slope, envisioning the putt¹s trail and keeping the ball within that track. 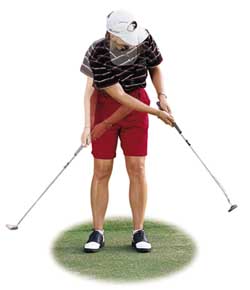 On really long putts, your normal stroke may not provide enough power. This is especially true for amateurs, who have a hard time swinging the putterhead back far enough to get the ball to the hole. Try hitting the putt as you would a chip. Take your chipping grip and stand taller with your stance slightly open. Swing the putter back and through with your arms and shoulders, like a pendulum chip. Let your lower body react to the motion. 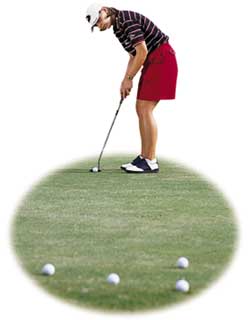 According to research by Dave Pelz, GOLF Magazine¹s Technical and Short Game Consultant, more than half of all first putts are longer than 30 feet. Therefore, it makes sense to roll some long putts on the practice green before you play. If the green is too crowded, forget about putting to a hole and putt to the fringe. If you have the green to yourself, putt to all four corners or to clubs placed 20, 30, and 40 feet away. Don¹t worry so much about technique, just concentrate on rolling the putts the right distance. n similar situations during the round, you’ll be much better prepared.

Fitness Exercises for Golf
Get Out of Reverse