Darrelle Revis and Troy Polamalu Put the Workout Back in Defense

Darrelle Revis and Troy Polamalu Put the Workout Back in Defense 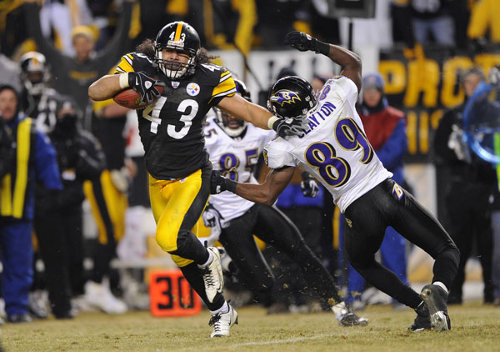 Darrelle Revis may be a whiny holdout, but he’s still the best cornerback in the NFL.  Troy Polamalu is simply the scariest safety in the game today.  What do these two guys have in common?  Unique workout routines.

Ever since Revis was a standout at Pitt pro day, he has been using unique methods to keep himself in shape.  In fact, many people would credit his workout with the phenomenal season he had in 2009.

Troy Polamalu isn’t just long hair and a tongue-twisting name.  When he came out of USC everyone knew he was going to be a beast.  However, injuries started to plague him early in his career and he turned to alternative training methods.

That is what Revis’ and Polamalu’s workouts combine–the work ethic of an NFL player and the brains of top-notch trainer.  How do these guys put the workout back in defense? 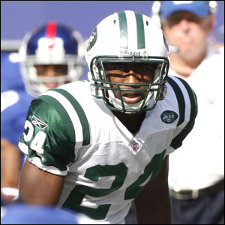 Darrelle Revis is obviously obsessed with success, and with good reason.  He has to face the league’s best receivers every Sunday, and you can’t prepare enough for tall, fast guys who can catch anything that’s thrown their way.

Revis works out to prepare for the season in a way that forces him to be doggedly focused onlyon football.  He travels far from his hometown of Pittsburgh.  He cuts off most communication with the outside world.

Revis does two workouts a day; strength and conditioning in the morning and football workouts on a field in the afternoon.  But the kicker is that he does all of these things in the dry Arizona heat of summer.

Consider it a combination of Bikram Yoga and the violent reality of professional football.  People have said that Revis trains in the heat because he wants to see how much he can endure.

How tolerant he is of game-situations, to him, is directly proportionate to how much he can stand during these insanely hot workouts.  We know that the results speak for themselves.

However, if you haven’t try to insert the “improve or bust” mentality into your workouts, I’d try it.  I don’t necessarily recommend powerlifting in 100 degree heat, but it’s pretty easy to imagine a weight based routine that is hot as hell.

If you’re training at your local gym to “get big” then just make sure you’ve cleared your mind before you hit the weights.  Turn off your phone.  Isolate yourself if you have to.  You can’t travel thousands of miles away like Revis does, but you can put yourself in a similar situation–and probably get similar or better results. 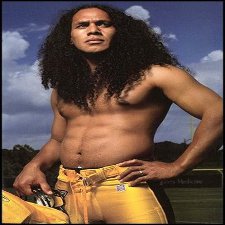 Troy Polamalu has blamed some bad seasons or missed plays on his injuries.  When he started working with Todd Marinovich he was told that he could stop with the traditional weight training.

Marinovich thinks that traditional lifting contributes to injuries in football and makes you react more slowly than you might otherwise.  Since Polamalu wanted to try to ensure he wasn’t going to get hurt again, he started a new routine.

What’s interesting about Marinovich’s descriptions of what Troy needs is that he takes things that seem simple, and then he uses them to his advantage.  My favorite is the “swimming pool story.”

Polamalu says that, as a kid, used to dive to the bottom of the pool, push off with his feet and float to the top.  This requires a burst of energy that is even faster then jerking a barbell.

He does more than use this “pool analogy” to get a good workout, but the idea of need that extra burst of speed could really help you lifters out there who are constantly at the weights and want to be as efficient as possible with your lifting technique. 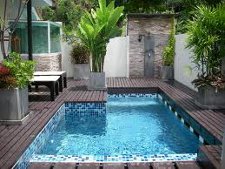 A natural progression here is to simply do some pool workouts that will help with your agility so that you can get around the weights even more easily than you do now.

It sounds like a crazy thing to do, but many of who subscribe to the “I need to do somecardio” idea might like the pool as an alternative.  Even if you don’t agree with that that philosophy–at least give it a try.  The water’s nice!

Just Jump in the Pool!

– 5 x 50m freestyle.  Just swim as fast as you can and remember to get a push-off from the wall when you turn around.  It’s that burst of speed that you’re looking for.
– Rest
– 5 x 100m freestyle.  Same process, only now you’ll really need the push-off if you want to have enough speed to finish.
– Rest

The rest of your workout can consist of simply swimming laps at a moderate pace.  Don’t forget to keep pushing off at the wall.  That burst is what your legs need when you’re lifting gigantic weights.

Bring the Weights to the Pool

Bring your favorite dumbbells to the pool and combine some weights with your “search for speed.”

It’s recommended that you do this routine five times because the swim is only two to four lengths of the pool each time.  Plus, for you big dudes out there, the weight portion of this routine isn’t really intense.

You can repeat the series as many times as you want if you’re trying to see how much you can handle.  If you’re anything like Darrelle Revis you’ll want to find out what kind of endurance you have and then push yourself harder.

If you’re anything like Troy Polamalu you’ll appreciate the alternative cardio–and the water!