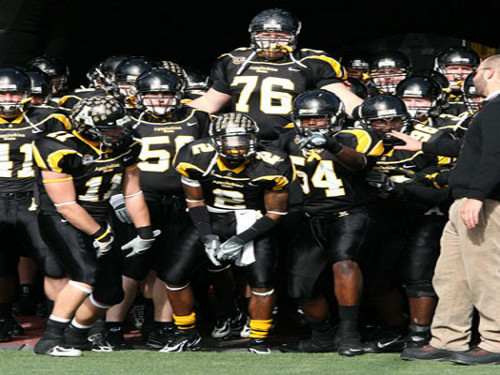 If you’re like me then you want teams to know their place.  For example:  The Royals suck.  The Bucs suck.  The Pirates suck.  The Clippers suck.  The Kings suck.  The Panthers are a cute little story every now and then and Northwestern is too smart to win at football. You get the idea.

So, when I heard about Appalachian State wanting to move its football team to the FBS (Division I-A) I got a little concerned.  I’ve been to enough Southern Conference football games in my day to know that this is a bad idea.

It isn’t just about big school vs. small school.  This is about knowing your market and sticking to it.  Teams so often get such big ambitions that they overstep their bounds and end up screwing their school over (and disappointing their alumni in the process.)

It’s time to set the record straight.  App. State, if you’re listening, heed my warning or you’ll end up like a former Division I-AA opponent of yours. 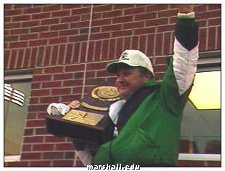 I remember growing up in the 80′s and 90′s when Marshall football was the biggest thing outside of Division I.  Jim Donnan made Marshall into a powerhouse and won the 1992 Division I-AA National Championship.

At that point Donnan got a little big for his britches and by 1996 he was gone — leaving for a failed stint at UGA.  Jim Donnan is a college football hall of famer, but he’s not the greatest coach who ever lived.

Marshall thought he was.

Because they thought he “big-timed” them they decided a move to Division I was a smart idea.  Now let me ask you a question: Have you heard a word about Marshall since they went to Division I 13 years ago?

Marshall had a chance to stay on top of powerhouse teams like Georgia Southern, Montana, and App. State. Instead, they decided to live in obscurity in Division I so they can get kicked around by better teams.

Don’t you think the fans, alumni, and students of Marshall would appreciate more winning and notoriety in the current Football Championship Series (FCS) than just getting by in the Football Bowl Series (FBS)?  I would.  Did the administration at Marshall think losing and money were preferable to winning and a little less money?

They could have built their kingdom with a good replacement for Jim Donnan — someone who would have stayed — and they could have won five or six national titles in the last 13 years.

Instead they chose to go big time, but they aren’t big time at all. 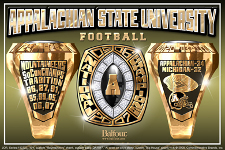 Appalachian State won three straight national championships in the FCS from 2005-2007.  They beat Michigan at Ann Arbor. They steamroll their current competition on a regular basis.

I honestly don’t think that they like winning very much.  If they enjoyed winning they’d stay right where they are.  If they enjoy money and losing they’ll make a move to Division I.

Honestly, I’d respect Appalachian State a whole lot more if they would just be honest and say, “We can make more money in the FBS.”

You’ll suck.  You won’t be able to recruit players good enough to compete regularly in any FBS conference. You won’t even be able to fill up your stadium anymore because you’ll stop winning at a breakneck pace.

Think before you act up there in Boone, North Carolina.  You’re thinking about giving up being the big fish to be somebody else’s dinner. 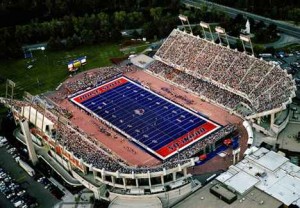 Look at Chris Petersen at Boise State.  He took over for Dan Hawkins when Hawkins left for Colorado.  Petersen could have easily used the job and his success to get a more notable gig.  It would have been easy.

However, Petersen has said at every turn that he wants to stay at Boise State.  Why?  Because he can build his kingdom there and really make something of Boise State.

They’re making a move to the Mountain West Conference from the WAC.  Next, they’ll be able to jump to the Pac-10.  It’s inevitable and Petersen knows that.

In five years he’ll be the Head Coach at an uber-successful Pac-10 program where he can regularly compete.  He already recruits the west coast and he could easily continue to recruit the west coast if stays in one place.

Chris Petersen will build his kingdom in the middle of nowhere, but bye-golly, it’ll be damned good!

App. State should take notes.  There’s no reason that they cannot continue to build this burgeoning kingdom in the FCS. They could continually bring in the best talent in their region and continually win.  They could easily break attendance records and satisfy the crowd in Boone.

You know how to piss off the crowd in Boone?  Move to the FBS and suck ass for 10 years after realizing you can’t keep up with the big boys.  Then one day you look at Marshall and say to yourself, “We shoulda known!”

That’s how you alienate everyone in your fan base.

Meanwhile, Chris Petersen will be kicking ass in Boise and having a grand old time.  He’ll be the talk of college football. He’ll be the guy that brought a school with a disgusting blue field to prominence.  They’ll be feared by teams everywhere. They’ll have learned their market.

Meanwhile, you’ll be losing to everyone on the block and Western Carolina, Furman, and Georgia Southern will be more successful than you.

Is that what you really want?