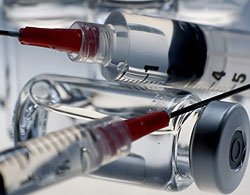 Steroids are one of the most popular illegal drugs used by professional athletes and bodybuilders in order to enhance physical performance. Steroid tests have been proved to be effective in providing objectivity of the results of sport events and indicating steroid use by athletes. It has been found, that these tests are useless in some cases, as some people are genetically immune to urine screening for testosterone, which is the major ingredient of steroids.

Scientists cannot explain for now, how this has become possible, but it is a fact – certain people’s bodies have mutated (roughly speaking) in the way, that the dope cannot be found by common steroid testing (urine test).

This news became known due to the study that involved 55 men and was performed by Jenny Jakobsson Schulze, a molecular geneticist at Karolinska University Hospital. All volunteers were injected a dose of testosterone and 17% of them passed the test, although their bodies contained steroids.

Other Tests to Indicate Steroid Use

It’s difficult to define, how many athletes are immune to steroid tests and know about their particularity. But, anyway, apart from the urine test, there are other methods of indicating steroid use, such as DNA test and other tests for substances besides testosterone that can detect steroid use.