Being the other half of someone has its set of challenges. Being patient, thoughtful, and considerate while remaining beautiful, captivating and sexy all at the same time can be hard even the best of us to balance. The idea that women are somehow supposed to be the heart of the home and still remain irresistible vixens invokes two images to mind: Martha Stewart and Angelina Jolie.

Although some men may view Martha Stewart as being older — what she represents is what we, as women, think is expected from us. A woman that can cook, clean, is crafty, has a successful career, and knows how to dress for the appropriate occasion is the quintessential “housewife.”

The “Angelina Jolie” woman is daring, adventurous, spontaneous, has confidence in her sex appeal, and knows when to expose a plunging neck line with stiletto heels. Somehow a woman is supposed to represent both of these ideals and know when the other is the better choice.

Here are a list of ways in which you can help your woman maintain the “Martha” and “Angelina” duality:

Cook for Me, But Only Wear an Apron and Heels 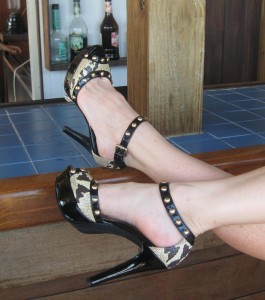 It’s no secret that there’s truth to the saying, “A way to a man’s heart is through his stomach.” Men love a tasty, home cooked meal and are impressed when a woman is skillful in the kitchen. Not only does this mean their kids won’t starve, it also means he has to spend less time trying to learn how to boil water. (Although some men are good cooks too!) The thing about making meals is that for one, you can work up a sweat and by the time you’re done preparing a meal, all you would like to do is sit down, eat and relax.

Now if the saying is true and maybe she threw in some oysters for dinner, then as a man you’re going to want to “reward” her for the hard work. But by this time, her hair’s going in three different directions and all she can think about are all of the dishes that need to be washed. This is when Martha disappears and you expect Angelina to be ready and willing.

From a woman’s perspective, if the meal your woman cooks put you in the mood and she’s feeling less than sexy at that time, help clear the table and take care of the dishes. While you’re cleaning up, she can go into the bathroom and like a female Clark Kent, freshen up, relax and turn into Ms. Jolie. Realize that at some point, she needs you to step up and help out while she has time to morph into the sexy siren you are dying to spend time with.

Clean the House, But Be Ready to Get It On When I Get Home 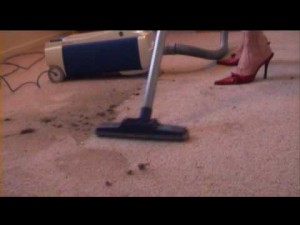 If she’s a stay-at-home mom or a woman who works from home, chances are she’s the one who in charge of keeping the house organized. Dusting, vacuuming, dish washing and laundry occupy her time and even though there’s a million things that she has to do where kids are concerned. Her goal is to try to get this done before you get home from work, but this may or may not happen.

This is the Martha Stewart side — the juggling of household and motherly duties. The crazy thing about it is that after one day of successful getting things done, she will have to wake up and attempt the impossible once again. According to an article at AssociatedContent.com, a study on stay-at-home mothers discovered that based on the duties they perform, they would make an average of $134,121 per year. Adding an additional sum for those who at the same time work a full-time job would equal over $200,000 per year! This proves that being a homemaker is no easy task and rivals the salaries of managers in corporations.

As a man coming home from work, who’s had to deal with annoying co-workers and domineering bosses, you are probably looking forward to an orderly environment with a loving woman welcoming you home. Just remember, her whole day has been encompassed by screaming babies, matching mix-matched socks, dusting off old photos and if she works at home—trying to manage a business. “Angelina” is the last thing on her mind.

One suggestion when you get home is instead of expecting the sexy woman in a mini skirt ready to wash away the problems of corporate world — spend an hour or two watching the kids so she can rest. Take over from where she’s left off. Finish putting the laundry away, tidy up the bathroom and straighten up the parts of the house she didn’t get to. Once the kids are sound asleep both of you can dedicate the rest of the evening to recreating parts of Mr. and Mrs. Smith. Not only will she feel calm from having some time to herself but will appreciate your effort and enjoy spending worry-free, alone time with you.

Keep Me Sane, But Keep Me Guessing

This last example was giving to me by my fiancé who said something like, “Keep me grounded, but don’t be boring.” This is the idea that a woman can help a man remain true to himself, but never lose that spark or that something special that made him fall in love with her initially.

This is very much the paradox that this article is about — for example, helping him get to your friend’s party by being the one who has enough know-how to ask for directions and then once at the party, being that fun, edgy, carefree woman that he loves to hang out with.

It could be five years into your relationship and he will still expect both. For men, realize that this is a juggling act that takes practice and is not always easy when life throws curve balls into one’s life. For women, understanding what he wants will help in understanding his reactions. Being the vixen can be fun and remembering the sexiness can help break away from your day-to-day duties as a mother, wife or business woman.

Don’t Forget to be Brad Pitt and Tony from Who’s the Boss?

This article isn’t necessarily saying that it’s bad to strive to be a vixen and the girl-next-door in one; nevertheless, it is just recognizing the difficulties of balancing the two ideals in today’s demanding world. As a man, if you want your woman to be everything all at the same time — sexy and smart, loving and dominatrix-like — then make sure you’re doing your best to be that guy from Who’s the Boss and Brad Pitt.

There’s no point in her being Angelina Jolie if you’re going to be Homer Simpson sitting on the couch every night. Relationships are about give and take so make sure your giving and much as you’re taking.