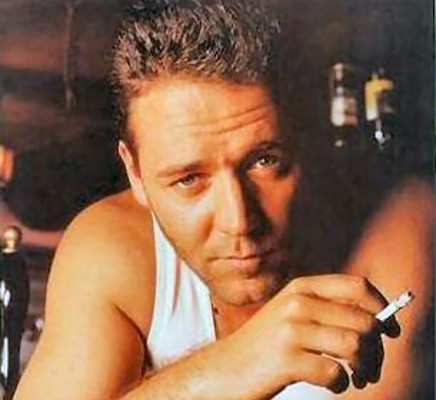 Russell Crowe’s latest turn as a desperate husband and father in The Next Three Days requires more than guts.  You have to be able to leave your child at a gas station so you can break your wife out of prison.

You have to not be freaked out by Liam Neeson as a creepy mentor, and you kinda need to be in shape if you’re going to run from the law.  Fortunately, Russell works out for speed and strength.  He can get away from “the man” and beat him up if he gets caught.

Again, this is the kind of workout that requires a balance between cardio and weights.  Some of you may not want to hit the cardio, but you might want to reconsider when you see what Russell does to get his cardio in. It might surprise you. 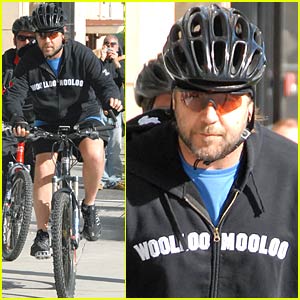 Russell doesn’t run.  He doesn’t do the elliptical.  (He runs in movies from bad guys, but you get the idea.)  Russell likes the bike.

You can do this one of three ways.  Some people hit a spin class.  Go to your gym and take the early spin class before you hit the weight room.  Actually, you could take any of the many spin classes that most gyms have every day.

If you wanted to take things a step further you could get yourself and set out on a bike every day for your cardio.  Basically, you’re replacing running with biking.  You can go farther, faster, and see more sights than if you just took a run.

Or, you could get that bike and ride it everywhere as a form of cardio.  I’m not saying you should get rid of your car, but if you’re in a position to bike wherever you want you should go for it.

It’s not bad for you, it’s not set into a routine (which some people hate for cardio), and it’s practical.  If you like terrain you could hit the mountains, but at the very least a nice road course would be beneficial. 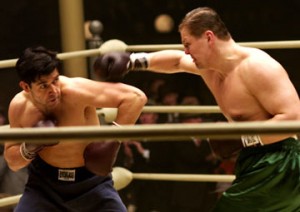 Just like an action star to like violent workouts!  All these action guys are doing fight scenes on set everyday for months at a time, and boxing/fighting a good workout.

Now, you could do this Russell’s way and freak out in a hotel and fling a phone at a concierge, allegedly get into a brawl at a Japanese restaurant, or even start something at an awards ceremony.  However, I don’t think that’s our thing here SteroidsLive.

Let’s try something a little more low key.  Boxing and a boxing class. You could hang a bag in your basement and punch the hell out of it, but that’s no as much as learning the finer points of the sport.

All the movement involved in boxing combined with the physical strength it takes to punch someone (or something) is a great workout, it keeps your heart rate up, and might come in handy if you ever run into muggers and you’re not the angry-type like Russell. 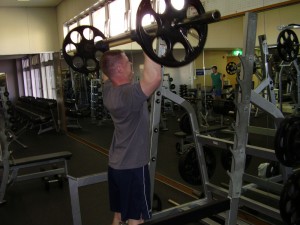 Russell Crowe trains for maximum strength.  He wants his fast twitch muscle fibers to be able to fire as quickly as possible, though we hope this is purely for shooting action scenes in movies.

Maximum strength is the thing that will put you ahead of someone who is just as tall as you and weighs just much as you.  They may look like they’re as strong as you, but if they haven’t trained for maximum strength they aren’t even close.

As long as you follow a predictable weekly pattern and don’t overdo it from day to day you can build maximum strength like Russell Crowe in no time.  Take a few of these exercises and create a maximum strength workout that you can handle on a daily basis.

Possibly the most popular amongst our celebs.  Start with a weight that’s comfortable for you, but over the course of time you should increase the weight you’re using as you grow stronger.

Start the barbell at your chin and press the bar up until you softly lock out your arms.  Slowly bring the bar back down and repeat.  Complete four sets of eight, six, four, and two reps respectively.

Using the cable machine in the gym grasp the cords overhand.  You want to start with the cables up and your arms bent.  Push down cable straight down to flex your triceps and slowly bring it back up.  Complete four sets of eight, six, four, and two reps respectively.

Lay down on the incline table and make sure to start with a weight that’s comfortable for you.  Also, always lift with a spotter since you are laying on an incline.

Stand up with the barbell in your hands at a weight you can handle.  Grip the barbell underhand and bring the bar right to your chest and relax.  Don’t move your whole body, simply move the bar with your elbows and forearm. Complete four sets of eight, six, four and two reps each.

Whether you’re fighting Roman armies, breaking your wife out of jail, or losing it in public you can be sure that Russell Crowe’s workout routine will serve you well. It may not make you into General Maximus, but it will maximize your strength.  And that’s all we can ask for.