LeBron James Sparks a Negative Trend for the NBA

LeBron James Sparks a Negative Trend for the NBA

Athletes in sports today are all about setting trends whether it is on the playing surface or in day-to-day life.  We have seen the crossover for athletes into music and film, and the numerous amounts of product advertisements in attempts to persuade the general public.

It’s too bad that more athletes don’t use their notoriety to increase the positive reinforcement of birth control and responsible alcohol consumption.

If you own a television there is a great chance you know that LeBron James decided to “Take his talents to South Beach” and join the Miami Heat this off-season. This sparked a firestorm of media coverage on the topic of great players playing together.

Since then it has been reported and

In 5-to-10 years I think we will look back at Chris Bosh and James joining Dwayne Wade and the Heat as the start of a terrible trend in the NBA.  Bosh left the only Canadian team in the NBA, Toronto Raptors, and James left the Cleveland Cavilers.  Those are both cities that have no appeal to a young super-star with millions of dollars.

After This is by far the most predictable league, since 1990 only seven teams have won the NBA Championship – Detroit Pistons (2), Chicago Bulls (6), Houston Rockets (2), San Antonio Spurs (4), Los Angeles Lakers (5), Miami Heat (1), and Boston Celtics (1).

Many people think that Major League Baseball is predictable because of big budget teams like the New York Yankees.  In the same time span with two less outcomes (still waiting on 2010 champ and a strike year), they have had 12 different winners over that time.  The National Football League has had 13 different league champions.

Only 10 different players were named NBA Finals MVP over that time.  This trend proves that greatness prevails in the NBA.  Many people were questioning whether or not James was great enough to get it done on his own, but now he is playing with Wade — one of the MVPs from that 10 player list.

Even if none of these other proposed dream teams form in the NBA, we may still be looking at a four-to-six year period of knowing who the Champion is before the season starts. 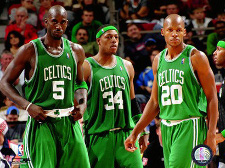 James didn’t come up with this idea he just modified it.  In ’08, James and everyone else witnessed the Celtics put together a big-3 with Paul Pierce, Kevin Garnett, and Ray Allen. Those three players surrounded by a strong supporting cast and great head coach, Doc Rivers, put together an incredible run for an NBA title.

The problem for Boston’s big-3 is that they were put together at the end of their careers.  James has just jumped ahead of the curve — when great players without rings usually give up and join another team where they have a better shot.

Why would any of the NBA’s current great players want to end up like Charles Barkley, Allen Iverson, and Reggie Miller?  They were all amazing players, but if you asked them what’s the one thing that’s missing from their Hall of Fame NBA career, it would inevitably be an NBA Championship.

Guys like Melo, CP3, and King James have already proven they can dominate in this league.  No one will remember how many points, rebounds, or assists they had, but they will remember that you’re a champion.

I actually agree with the thought process of leaving now as opposed to late. If there is a possibility that you might leave when your 30 or 31, then why not leave when your 25 or 26 to go play with another great player who is of similar age?

The notion of these guys playing together for the same teams is a bad idea for the NBA, but a great idea for the player himself.  James has already made the move that I believe both Anthony and Paul will make.  I think we will see more young super-stars signing shorter contracts in order to join forces and chase championships during their prime.

The pros to this idea are better chances for championships, playing for a vibrant city, and share the pressures of performing.  The cons are people will judge you negatively for a short time and you personal numbers may be sacrificed.

James has made the move that many great players have made before him, maybe not the greatest players.  The fact is it’s a new day with new standards and who’s to say that James, Anthony, and Paul can’t change the way things are done.

In the slightly modified words of Chris Rock, “I’m not saying they should do it, but I understand.”