Five Chick Flicks Men Can Use for Inspiration

Five Chick Flicks Men Can Use for Inspiration

If you are not a fan of romantic comedies and your girlfriend or wife drags you to them, here’s a solution: why not draw inspiration from one so she can experience it firsthand? Women love romantic movies because they want to watch how two people find each other and fall in love. Moments of trials and tribulations add to the suspense because they’re not sure if the main characters will end up together (even though we all know they do).

We all know that real life and love is a lot more complicated then a two-hour romantic comedy but there is no harm in getting a few ideas from them every now and then. If it’s her birthday, your anniversary or a “just because” day and you’re out of ideas – here are five chick flicks, women would love men to use as inspiration. 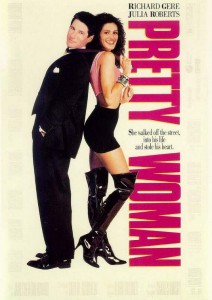 No, we don’t want you to pretend like you’re picking up a prostitute, but the idea of being wined and dined night after night is a dream come true. One of the most romantic scenes in this movie is at the end when Edward (Richard Gere) shows up at Vivian’s (Julia Roberts) window in a limo with flowers declaring his love for her.

Most men probably want to barf or roll their eyes at this part but it’s the “element of surprise” that captures our hearts.

If the woman in your life has been studying hard for a test or she’s had a long day at work—brighten her day by showing up at her school or job with some flowers and plans for dinner.

Not only will she be surprised but she’ll never forget that moment and will always remember how thoughtful and romantic it was.

Speaking of Edwards — who doesn’t know the phrases “Team Edward” and “Team Jacob”? If you were one of the guys dragged to watch this teenage chick flick and hated it, here’s why some women might find this saga romantic. It’s basically the idea of opposites attracting.

Edward is handsome and mysterious, Bella is plain and ordinary, but once they find each other, she is thrust into a world of vampires and werewolves. That last part is a stretch but we love the idea that even the most nerdy, uncoordinated girl can find love.

One of the most romantic scenes in this movie is when Edward rescues Bella from getting attacked by men and later confesses over a candlelight dinner how protective he is over her. Women love intimate, candlelit dinners and a confession of a man’s undying love for them…the vampire part is a plus but that might get tricky. 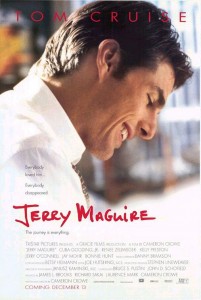 Tom Cruise’s character in this film is an example of a man who is so focused on his career that he forgets the woman who’s stood by him. The part at the end when he shows up in the doorway apologizing for his mistakes and says “You complete me,” probably not only got a couple of sighs in the theater but a few tears too.

Men have most likely seen this movie because it’s about football and the politics of the agent/player relationship but don’t forget that this is a story about love.

If you’ve been working overtime and have been too busy to spend time with your loved one, take the time to verbally let her know how much you appreciate the things she does. If you want to show up in the doorway at a party or family event to say this in front of everyone—that’s on you. She might be embarrassed on the outside but deep down, she’ll appreciate the gesture if she knows you’re genuine about it.

The Eiffel Tower scene at the end with Sam (Tom Hanks) and Annie (Meg Ryan) meeting on Valentine’s Day is classic. The way they stare at each other in disbelief and wonder is one of the most romantic moments in chick flick history. Another plus is how his son liked her from the start and is the reason they meet in New York. What men can take from this movie is the romantic getaway element.

Women love the idea of being whisked away for a romantic vacation—and if it’s too expensive to fly somewhere like New York, Paris or Italy then driving somewhere a couple of hours away from wherever you live can work too. If you cannot break away at all then have a vacation at home—take a few days off, tell everyone you’re going away for an extended weekend. Turn off the phone, computer and television to spend quality time together and find fun things to do around the house. You can succeed at being romantic without breaking the bank!

Even though this movie is a love story, there’s a great amount of comedy in it so I don’t consider this a full-on chick flick because guys enjoy it too. The ending, of course, when Robbie (Adam Sandler) serenades Julia (Drew Barrymore) on the plane with the song “Grow Old With You” is memorable because it’s something that most women wouldn’t expect a man to do.

Using this movie as inspiration, you don’t have to grow your hair 80’s style and quit your day job to be a wedding singer. A blog at popular-culture.families.com mentions a survey Hallmark conducted regarding Valentine’s Day. It found that most women don’t care about the presents they receive just as long as their mate is the one who thought of them.

Relating this back to “The Wedding Singer,” thinking outside the box and taking a risk is highly romantic. It makes a woman feel like she’s inspired you to do something a little differently. Of course, serenading her on a plane along with Billy Idol isn’t realistic but spontaneously playing her favorite song at home and dancing to it with her is.

Romance and chivalry might seem like ideas of the past but men will be surprised at how much women appreciate them. Sometimes even the littlest thing like a Post-it note with the words “I Love You” can touch a woman’s heart.

It doesn’t have to be exactly like a movie but if you’re having trouble coming up with something special to do for her, these five movies plus a dozen others can get the ball rolling.