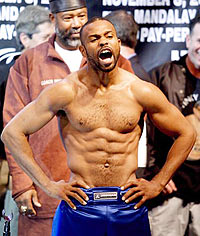 Recently, the former best pound for pound boxer in the world, Roy Jones Jr., challenged Anderson Silva who is widely known as today’s current best pound for pound MMA fighter to a fight inside the UFC octagon. Roy Jones Jr.’s boxing career has been on the decline since 2004 when he was KO’d by Antonio Tarver in the 2nd round. On the other hand, we have Anderson Silva who has been so dominant in the UFC that he has to move up weight classes just to find some decent competition. Initially after hearing about this challenge from Jones Jr., I thought to myself, does this guy need money? Or is he just trying to get back into the spotlight? Well, none of us will have to worry about this fight ever taking place, because Dana White already stated he would never let this fight happen while Silva is under contract with the UFC. Naturally though, whenever the idea of a boxer and an MMA fighter going head to head comes up, it fills the minds of fight fans with curiosity. The fact is that a boxer would probably get tapped out within the first minute of an MMA fight, and a MMA fighter would get put on the canvas by a boxer probably in the first couple rounds of a boxing match. It really is like mixing apples and oranges, the two are just totally different, and impossible to compare….although people will die trying.

Gina Carano Finally Makes a Statement Regarding Her Loss to Cyborg
Edith Labelle, Ex-UFC Octagon Girl, Talks About Being Let Go From UFC
Fedor Emelianenko vs Brett Rogers, Is This a Smart Move By Strikeforce?
A Tribute to Bruce Lee