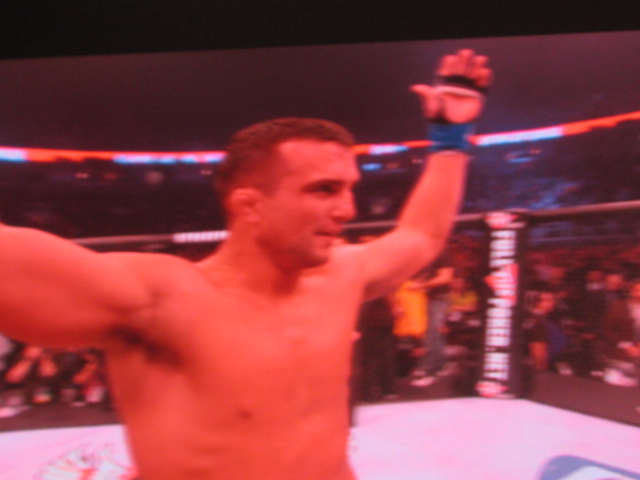 Fight Summary: Scott Smith showed the world that his cage name should be changed from “Hands of Steel” to “Man of Steel”. Cung Le dominated Smith for almost a full three rounds, delivering the most punishing kicks and punches imaginable. Smith endures this extreme punishment and pulls off a miraculous TKO (Strikes) late in the 3rd round. Here’s the Play By Play:

Round 1. Crowd is chanting Cung Le before fight starts. Le throws a kick to body. Le throws a spinning back kick to body but no real damage to Smith. Le drops Smith with spinning back fist to face. Smith covers up as Le gets on top and rains down punches. Le gets side control and puts Smith up against the cage. Smith on bottom getting punches in head covering up, not fighting back. It doesn’t look good for Smith as Le brings hammer fist after hammer fist and punch after punch. Smith seems paralyzed.

Smith finally stands up and Le brings a knee to the head. The fighters go back to the center of cage and unbelievably, Smith is the aggressor. Le brings another spinning back kick to body and drops Smith. 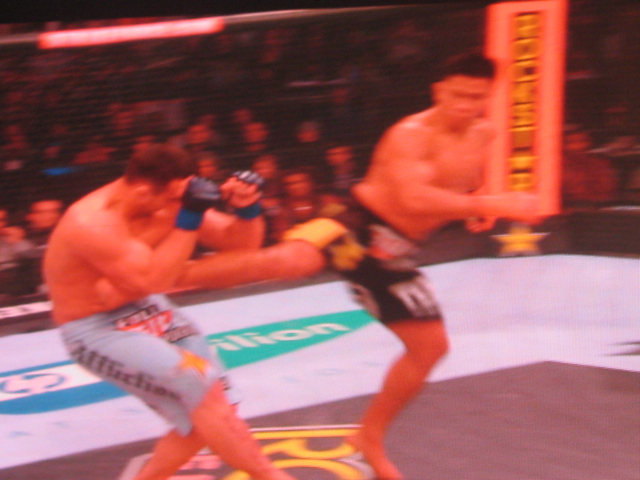 Smith stands back up and catches a round house to the head. Smith throws combo and lands a left. Le with another spinning back kick to Smiths body puts him up against the cage. Smith bounces back to center of cage. Smith lands an over hand left to Le’s head. Le leg kicks. Smith lands overhand right and the fighters clinch. Smith puts Le against the cage as the round ends.

Round 3. Le lands a spinning back kick to Smith’s head, and then spinning back kick to Smiths body and a Round house to face. Wow, Le’s kicking is amazing! He throws another kick to Smith’s body. Le throws yet another spinning back kick to Smiths body that tosses him against the cage. Smith bounces back to the center of the cage. Smith throws out a combo and misses. Le lands a small body kick then a small head kick. Smith again is the aggressor even though he is taking amazing punishment. Smith swings for the fences with an overhand right and upper cuts that miss. It now seems that Smith, realizes that he will need to finish Le to win this fight. With all the damage Le has delivered so far, a decision for Smith is a sure loss. Le throws a combo, putting Smith back up against the cage and throws another spinning kick to Smith’s body. Le gets a single leg take down, but Smith immediately stands back up and exchanges. Le throws an overhand left that lands. Suddenly, Smith throws an over hand right that rocks Le and then drops him with a great left hook.

Le obviously in trouble, stands back up and catches a left hook from Smith and then gets dropped hard with an over hand right by Smith. Le falls to the floor face down and Smith goes in for the killer ground and pound. Le is obviously unable to defend himself, and the Big John McCarthy stops the fight. Unbelievable!

Megumi Fujii Female BJJ Phenomenon
Is Tito Ortiz Leaving the UFC?
Fedor Emelianenko vs Brett Rogers, Is This a Smart Move By Strikeforce?
A Tribute to Bruce Lee