Cro Cop Cancels Match. Even Machines Have Down Time.

Cro Cop Cancels Match. Even Machines Have Down Time. 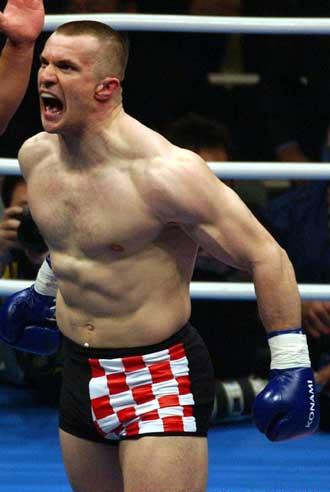 MMAMANIA: For better or for worse, former PRIDE and UFC heavyweight Mirko “Cro Cop” Filipovic has withdrawn from his DREAM 4 grappling match against Ralek Gracie to give more recovery time to his nagging injuries according to Croatia’s Dnevnik.hr.

Scheduled to fight in the DREAM 5 main event against K-1 superstar Jerome LeBanner, Filipovic had more to lose than to gain by testing his mettle against Gracie.

As we reported in early May, Cro Cop suffered a minor knee injury during his training. The Croat initially dismissed the injury as a non-issue, but the cancellation of his match against Gracie indicates that it may still be lingering or perhaps coupled with existing injuries.

And if he’s going to go toe-to-toe against the dangerous LeBanner on July 21, he needs to be 100%.

Cro Cop most recently recovered from back-to-back losses inside the Octagon (Gabriel Gonzaga and Cheick Kongo) to take out Tatsuya Mizuno with ease during the inaugural show for DREAM last month. He has vowed to put together at least three consecutive wins and return to the UFC as early as January 2009 to redeem himself.

However, a rematch with Fedor Emelianenko on New Year’s Eve possibly stands in his way, as well as the French-born, LeBanner.

LeBanner has not competed in mixed martial arts since 2006. And although his MMA experience is limited, his kickboxing resume is not. In fact, he’s been in against the best, including Ernesto Hoost, Peter Aerts, Semmy Schilt, Mark Hunt and others.

Cro Cop and LeBanner have actually competed against one another during a K-1 event in 1996, which the Croatian won via unanimous decision. Expect a similar bout: Striking, striking and more striking. It would be a total shock if this match hits the canvas.

Now word yet from DREAM officials if Gracie will be given a last-minute replacement or if the grappling bout will be canceled altogether.

Fedor Emelianenko vs Brett Rogers, Is This a Smart Move By Strikeforce?
A Tribute to Bruce Lee
Gina Carano Finally Makes a Statement Regarding Her Loss to Cyborg
LaTasha Marzolla - Playboy Model & MMA Fighter